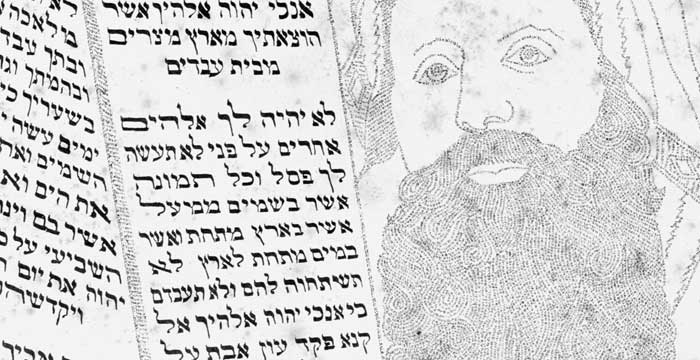 TOBIA RAVA’
Based on the concept that nothing is created, nothing is destroyed, my hanukkiah also reflects a technique I have used in many of my works, which Montale referred to as “objective correlative”: using recognisable objective symbols to detach objects from their original significance and transform them, expressing a variety of concepts, ideas and sensations in the process. I originally planned it differently.
I envisaged a lamp in the shape of a Jugendstil mem, as a reminder of the miracle of the phial of oil the Maccabees found after the Temple had been destroyed by the Greeks.
The material was different too: glass. I had discussed it with Aldo Mondino, and he wanted me to use glass, the material typical of Venice. Then for a number of reasons I decided to alter my project. I left part of the letter, which I decorated in my usual style: I am deeply sensitive to the complexity of the Hebrew language. In my mind Hebrew letters and their numerical values interact with their semantic implications. The two frogs represent the second plague: frogs have an instinctive fear of water and fire. But in the story of the exodus from Egypt, the frogs knew they had been sent by G-d and nothing could deter them. The role of the frogs is out of context, but still extremely significant.